No matter what the age of your children is, they will surely enjoy these fun parachute games for kids. The parachute is a large round canvas with multicolored colors and very solid. It allows to set up not one but many games for real playful moments, exchange in a cooperative spirit. The parachute is made of spindles of different colors. It has handles that allow children to hold it correctly. But it can be of variable diameter and can have or not a central opening. It is perfect for outdoor activities.
It is a real tool that allows to set up a multitude of games to work on cooperation and team spirit. The small parachute measures 3.60m in diameter, the large parachute measures 6m in diameter and the very large parachute measures 7.30m in diameter.
For many of these games, you can also use a white sheet. Here are some fun games with a parachute.

Parachute games and activities for kids

Try these games and find out why parachute is so much fun!

Do different games, figures and choreographies with the parachute

Lift the parachute high overhead. Call one child’s name and have him run to the other side before the parachute comes down and tags them.

The children will raise the canvas in the air and then lower it by placing themselves under the parachute and sitting on the edge. This will form a large mushroom.

Form 2 homogeneous teams. Each team will take a place on each side of the parachute by holding the handles. Each team takes the place of a half circle.
Put a ball in the center of the parachute. With the movements, the children will have to score 1 point in the opposite camp. To do this, the ball simply has to come out of the canvas to score a goal.

Round games with a parachute

Do a choreography (e.g. spin the parachute) to the rhythm of a music. You have to stop when the music stops and start again when it starts.

Divide the number of players into two teams. Ask the teams to stand on two sides of the parachute, holding it firmly. The task is to pull the opposite team onto their side. Whoever accomplishes this goal faster wins the game.

Kim’s Games with a parachute

You know the famous game Twister. You can use this canvas to replicate the game by having the children place a foot on red, a hand on blue and so on.

Children must make the ball go in circles by adjusting their gestures one after the other. The ball must not leave the canvas either from the outside or from the central hole.

The goal here is to take a ball and make it jump high in the air and then recover it in the canvas without making it go out. Make as many throws as possible.

Make small waves and place tennis balls on the parachute.

Let the children stand while holding the parachute with either the left or right hand. All of them have to unanimously decide on which hand to use, as they all must be facing one direction. Have an adult, such as the teacher or a parent, supervise the activity. They should instruct the players to do as instructed: sit, stand, move, or pause. The result will be a beautiful merry-go-round formation by the players.

The educational advantages of parachute games

Parachute games are a great way to entertain and provide exercise to children of all ages. 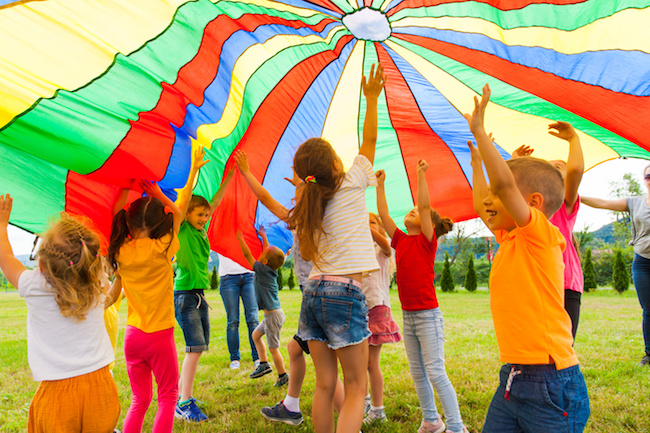